At only 21, Connor had big ambitions to own his own home and it became even more important when the coronavirus pandemic started. Connor began his search in December 2019, and found RBH's Hopwood Green development in Middleton advertised on Rightmove. 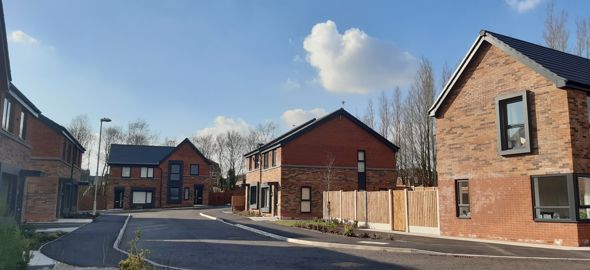 At only 21, Connor had big ambitions to own his own home and it became even more important when the coronavirus pandemic started.

Connor began his property search in December 2019 after saving £3,300 as a deposit, and found RBH's Hopwood Green development in Middleton advertised on Rightmove. The scheme provided 25, two and three bedroom homes for shared ownership with prices starting at £60,725 for a 35% share. The development has been built by Lovells on former derelict land owned by RBH. It was a huge success showing the real demand for affordable housing in the area.

“When I started looking for a home, due to my deposit and income I couldn’t afford much in the area I wanted to live in. When I saw Hopwood Green advertised it was the perfect opportunity for me. I hadn’t heard of shared ownership before but after doing my research realised it was a fantastic scheme which meant I could afford to buy a better quality, bigger home in a nice area, all while being really affordable. The flexibility means that when I can afford to I will buy additional shares”

When it comes to shared ownership, first-time buyer Connor would definitely encourage others to consider it as a way of getting on to the property ladder. Connor lived in the neighbouring area of Heywood with his grandmother. When Covid 19 started, Connor’s grandmother needed to self-isolate due to her age. As Police Officer, Connor was unable to self-isolate with her, making the need to get into his own home an even bigger priority. In April Connor's dream of becoming a home owner became a reality when he completed on his new home. He has settled in really quickly and now has his own space where after his important job as a key worker he can rest and re-cooperate.

“It was clear to see the impact the new homes would be making to the area, and in particularly the obvious need for more shared ownership homes to be built across the towns and Villages of Rochdale. Shared ownership is a lifeline to people whose budgets won’t stretch to buying on the open market but it often not as understood as many of the other products on offer. The new development is made up of truly beautiful homes and I’m delighted that we have been able to help local people, especially during this pandemic."